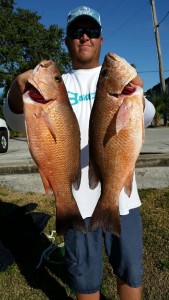 I made a mangrove snapper trip with Capt. Billy Miller and the results were outstanding.

We went to some rocky bottom west of Anna Maria in 40 feet and anchored over the highest piece of structure. Miller put out two chum bags and we started cutting up pieces of white bait and dropping them in the chum line.

A small to medium white bait, nose hooked on a 1/16 ounce jig head and free lined back in the chum line resulted in some real nice mangos quickly hitting the fish box.

Snapper will get smart after a few are caught and these were no exception. We switched from twenty pound mono to eight pound mono and the bite started again. Our last change of direction was going to the bottom with weighted baits and that trick finished off our boat limit.

While fishing the bottom we also caught some real nice keeper gag grouper on our light tackle which were released.

A few Spanish mackerel also made an appearance in our chum line with most of them cutting off our light mono leaders.

I don’t know if the kingfish are still around. After we limited on mangos our plan was to go looking for kings but the wind picked up and we decided to head for home.