The Skyway bridge is one of the longest artificial reefs in the world. Spanning over 4 miles, the pilings and structure are a natural habitat for fish of all kinds.

Fishing there is terrific either from a boat or from the fishing piers on both ends.

Reports this week from the fishing piers say Spanish mackerel have moved in good and can be taken on silver spoons, Gothca plugs and cut threadfin strips under a float. Blue runners and jack crevalle will also hit the mackerel baits.

Mangrove snapper have really been biting well around the pilings. Try live white baits or live shrimp on the bottom near structure. 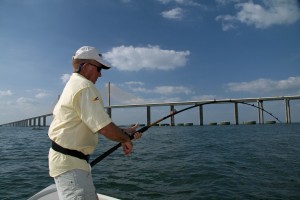 The Skyway is one of the most consistent bait spots anywhere. With bait fish come bigger fish to feed on them all the way up to the apex predators, giant sharks.

Bottle nose dolphin are also attracted to the bridge and through the years they have become trained on how to steal fish off of your line. Filming an episode of “Hooked on Fishing” a few years ago, we got great footage of a dolphin eating our Spanish mackerel off the line while fishing from the south Skyway fishing pier.

Tarpon fishing under the main bridge span the last few weeks a dolphin we named “Stubby”, because of his short, irregular dorsal fin, paid us a visit. Stubby took every single threadfin or pinfish off of our hooks without ever getting hooked. The only bait he would not eat was a pumpkin seed. Unfortunately, neither would the tarpon.

The only thing to do in a case like that is to move. I don’t mean 1 or 2 openings over, I mean to the other end of the bridge. Even then he, or one of his buddies, might find you. Another thing to try is turn off your depth recorder. The sonar depth pulse is easily heard by the dolphin and they can hone in on exactly where you are.

It is against all rules to harass the dolphin. Throwing things, making noise and actions like that are strictly forbidden and it doesn’t scare the dolphins away.

Boca Pass and the surrounding Charlotte Harbor waters are full of tarpon. While fishing in Boca Grande Pass it is illegal to use breakaway jigs and leads. Use courtesy in the crowds and move slowly when approaching rolling tarpon.