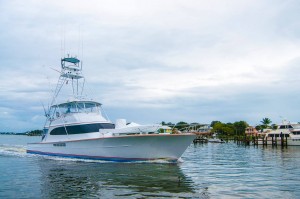 Stuart, Florida is one of the best sailfishing ports in the U. S. and I was there this week filming an episode of  ”Fishing with Bill Miller.”

I fished on the beautiful 72” custom built Merritt sportfisherman “Briar Patch” captained by Capt. Karl Anderson. Anderson had an all star crew including Capt. Tim Sperling and Capt. Charlie Stuve who worked the deck and deployed the baits.

They put out a double tier mullet dredge teaser on one side of the boat and a squid chain teaser on the other to lure up the sails. Our hook baits consisted of rigged ballyhoo, split tailed mullet and bonito strips with colored dusters. 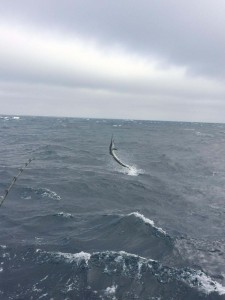 January is a prime time for sailfish along the east coast but it can also be very rough in the Gulfstream during that time. The seas on our trip were 6-8’ high and the sails were being picky.

Despite less than ideal conditions, I caught a beautiful Atlantic sail on 20 lb. tackle as did my wife, Debbie. Both sails were quickly photographed and released.

In addition to the sails we caught numerous mahi, kingfish, barracuda and little tunny.

On the home front, Capt. Billy Miller reports good speckled trout fishing along with some redfish and snook mixed in. Live shrimp has been the best bait although CAL jigs and the classic 52m MirrOlure have also been doing some damage.

Miller has also been finding a few pompano around the passes. Try drifting the passes and throwing a yellow pompano jig with a pink teaser fly for good action.