Kingfish action has been terrific this week. Great reports are coming in from up and down the coast. 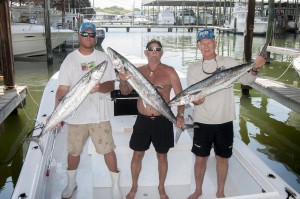 The Veteran’s Reef off of Dunedin has been on fire reports Bill Graham. Graham and friends had multiple hook ups all morning long, earlier in the week using white bait, and finally got tired and went home.
I fished four days this week and limited out by mid morning each day. After we filled our limit, we switched to 12 pound inshore spinning gear and had great catch and release fishing.
Capt. Billy Miller has also been in on the action catching easy limits for his parties including kings in the 35-40 pound range. White bait and blue runners were the bait of choice three miles off St. Pete Beach.
From markers 5 and 6 in the Egmont ship channel and out to the Whistler buoy have also been a popular spots for anglers slow trolling white bait, blue runners and cigar minnows. Bait can be caught around the ship channel markers using sabiki rigs.
Good catches are being reported by Capt. Van Hubbard off Boca Grande. Hubbard has been catching big kings to 40 pounds in 20 feet of water off Boca Grande beach using thread fins and big white baits.
Redfish action has been very good around the Pinellas Point area and Weedon Island continues to be a snook hot spot.   i